LONDON — Ghislaine Maxwell comes from a family dominated by her father, Robert, whose mysterious drowning at sea left behind conspiracy theories, financial scandal and a fallen empire.

Her arrest on Thursday in the United States for allegedly procuring young girls for the disgraced financier Jeffrey Epstein has put the family back in the news.

Robert Maxwell’s life read like a novel, having variously been suspected of working for the British, Israeli and Soviet secret services.

The Czechoslovakian-born businessman was born to Jewish parents who would be killed by the Nazis, and came to Britain penniless at the age of 16. 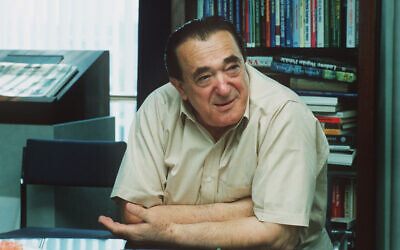 An undated photo of British newspaper magnate Robert Maxwell, who was found dead in the sea off the Canary Islands in November 1991, following a reported fall from his yacht. (AP Photo)

He changed his name from Jan Ludvk Hyman Binyamin Hoch and fought for the British Army during World War II, going on to set up a publishing business after the end of hostilities.

From there, he built up one of the biggest media and publishing groups in the world.

At its peak in the 1980s, he employed 16,000 people in a raft of companies including Britain’s Mirror Group Newspapers, US publishers Macmillan, and the Berlitz language schools.

He was chairman of the Oxford United football club and a member of parliament from 1964 to 1974, representing the left-wing Labour party.

In business, he was an authoritarian — and often controversial — figure, who met world leaders of the time including Ronald Reagan, George H. Bush and Mikhail Gorbachev. 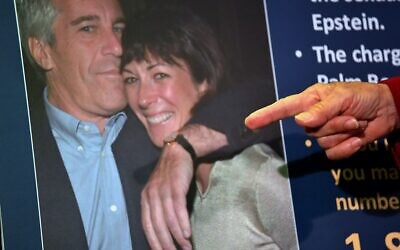 In 1995, his youngest son, Kevin, said his father was capable of great generosity and charm but also demanded “absolute loyalty,” and reacted badly to criticism.

He was capable of “verbal brutality” and sometimes a bully, who worked up to 17 hours a day, seven days a week, and was “motivated by power.”

“He did not consider himself above the law… but would stretch it as far as it would go,” Kevin Maxwell said at his trial for defrauding the Mirror Group’s pension scheme.

Maxwell, dubbed “Cap’n Bob” and the “Bouncing Czech” in the British satirical magazine Private Eye, died when he fell from his yacht, the Lady Ghislaine, off the Canary Islands in November 1991. 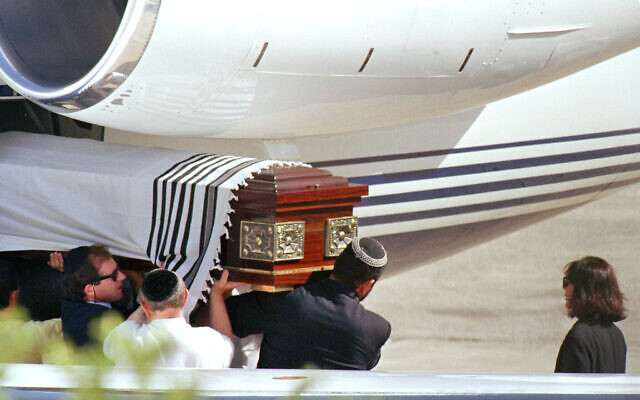 Ghislaine Maxwell, far right, daughter of the late Robert Maxwell, looks on as the casket containing the body of Robert Maxwell is unloaded from a plane in Jerusalem, November 8, 1991. (AP Photo/Heribert Proepper)

His death sparked conspiracy theories but his daughter was adamant: “One thing I am sure about is that he did not commit suicide. I think he was murdered,” she told Hello! in 1997.

After his death, over 400 million ($500 million) was found to be missing from his employees’ pension fund and was found to have been used to bail-out loss-making companies in his empire.

The revelations shocked the family, as his reputation changed from business guru to crooked tycoon.

Elisabeth Maxwell, a Protestant French national from Lyon, met her husband just after WWII and spent 46 years of her life with him.

The couple had nine children together and even after his death she defended his memory and reputation, despite the scandal leaving her distraught and in financial dire straits.

She defended him in an interview with The Times newspaper in 1991, suggesting he made enemies because his generosity matched his enormous bulk.

“He had great moral principles. He wanted to make the world a better place,” she said, but had no inkling of the massive fraud he perpetrated at the time.

Elisabeth — known as Betty — was a historical researcher of some repute, and looked into Maxwell’s own background growing up in Czechoslovakia, and the fate of his family. 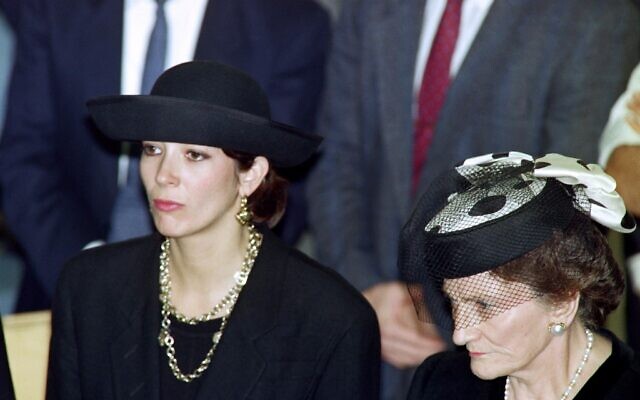 In this file photo taken on November 10, 1991 British press magnate Robert Maxwell’s daughter Ghislaine (L) and wife Elisabeth (R) attend the funeral service for burial on the Mount of Olives of their father and husband (Sven NACKSTRAND / AFP)

She gave lectures on the Holocaust and promoted good relations between Christians and Jews.

Maxwell, who was buried on the Mount of Olives, referred to his wife as “the keeper of my Jewish soul.”

Two of Maxwell’s sons worked closely with him, Ian and Kevin, the number two in his father’s empire, and were the central focus of investigations into his misdealings following his death.

The brothers faced lengthy criminal proceedings but were acquitted of the fraudulent misuse of pension fund assets in January 1996 after a mammoth 130-day trial. 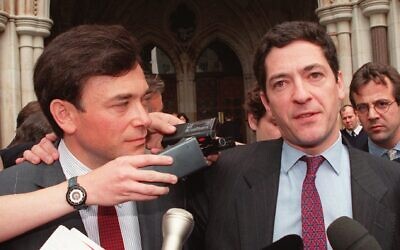 Kevin Maxwell, declared bankrupt by a London court for a record 406 million, sold his house in upmarket Chelsea, west London, and moved to a cottage near Oxford, southern England.

His wife, Pandora, told the fraud trial her husband’s relationship with his father had been strained in the months before his death, and he wanted to leave the family business.

In lockdown with a conspiracy theorist